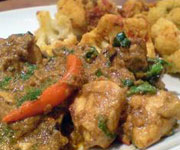 This is a hot, Spicy Chicken Curry Recipe with a really satisfying thick sauce. The fennel seeds, garam masala and fresh coriander are vital to the flavour, balancing out the heat with a touch of aniseed and sweetness.

Peel the onion. Cut it in half, and cut one of the halves into thin strips (save the other half for later). Heat 1 tablespoon of the oil in a frying pan over a high heat. Once it’s hot, put in the onion strips and fry them until the are properly caramelised. You’ll need to keep stirring throughout. They should be really browned by the end of the process, don’t be scared! Once they’re browned take them off the heat, drain away any excess oil and put them to one side. Peel and roughly chop the garlic and ginger. Roughly chop the other half of the onion, the tomato and 2 of the chillis and put the garlic, ginger, onion, chilli, tomato and tomato puree in a blender and whizz to a smooth paste. Get the rest of the oil good and hot in a heavy bottomed sauce pan over a medium heat. Once it’s hot put in the mustard and fennel seeds.

When the mustard seeds start to pop pour in the paste from the blender and fry on a high heat for 2 to 3 minutes. You’re aiming to get the oil really taking on the flavours from the paste. Add the yoghurt to the pan one tablespoon at a time, stirring it each time until it’s fully combined before adding the next. When you’ve added all the yoghurt put in the ground coriander, ground cumin, cayenne pepper, salt and the remaining 3 whole chillis and give it a good stir. Chop the chicken breasts into 1″ cubes and add the cubes to the pan. Turn the heat right down, cover the pan and cook for 15 minutes. After the 15 minutes is up stir in the caramelised onions and the garam masala, and cook uncovered for another 10 minutes so the gravy really thickens. Roughly chop the coriander while you’re waiting. When you’re ready to serve take the pan off the heat and stir in the coriander.